Hey kids!  I don't get to many cons these days -a situation that will be remedied once I get back to NYC- but I recently went to two in as many weeks.  I enjoy pressing the flesh with funnybook readers- swapping tall tales and pimping projects- and earning a bit of jingle by drawing sketches.  I thought you might like seeing some of them.  Peel your peepers and get a load of these. 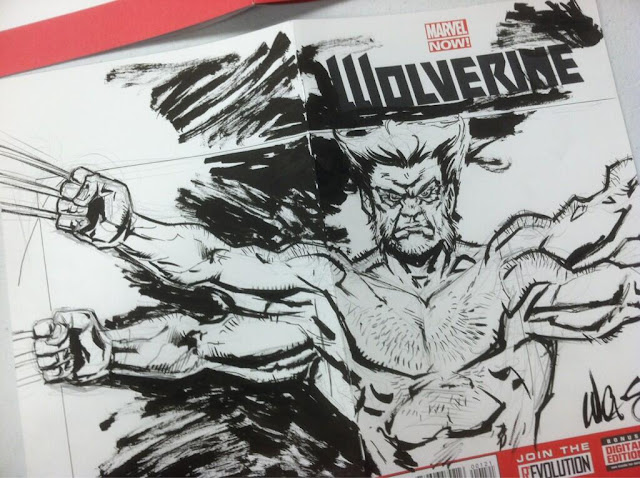 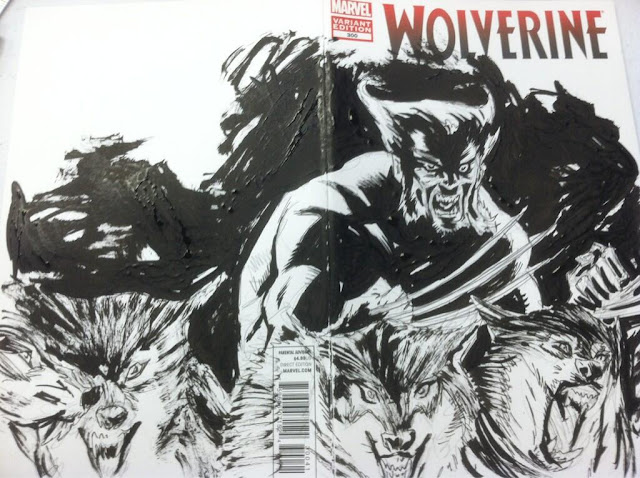 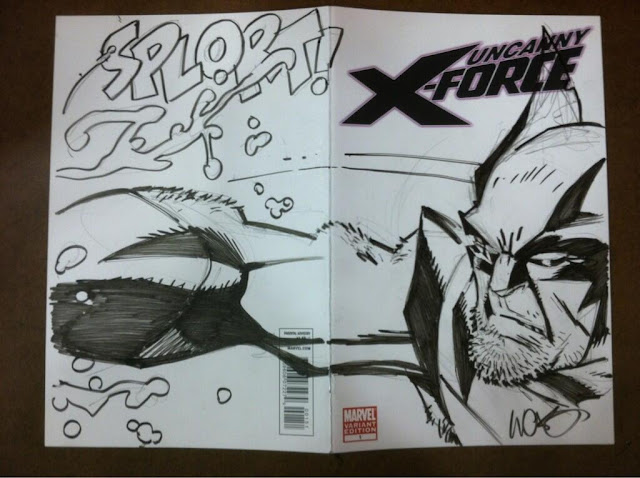 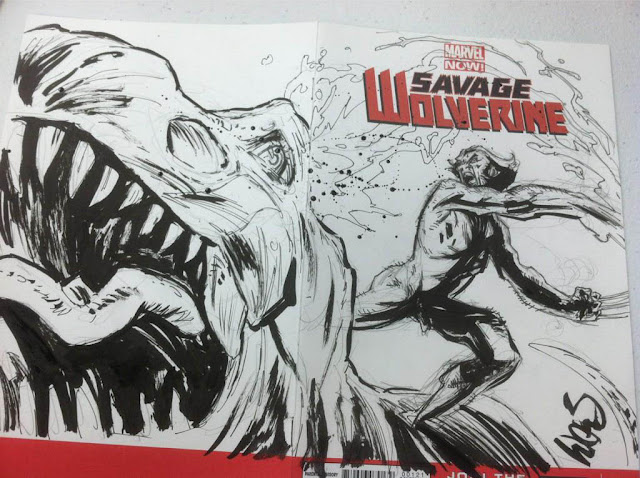 Deadpool is usually the most requested doodle at shows, but this go around Wolvie won by a nose.  Though, one guy got three of them.  The fix was in. 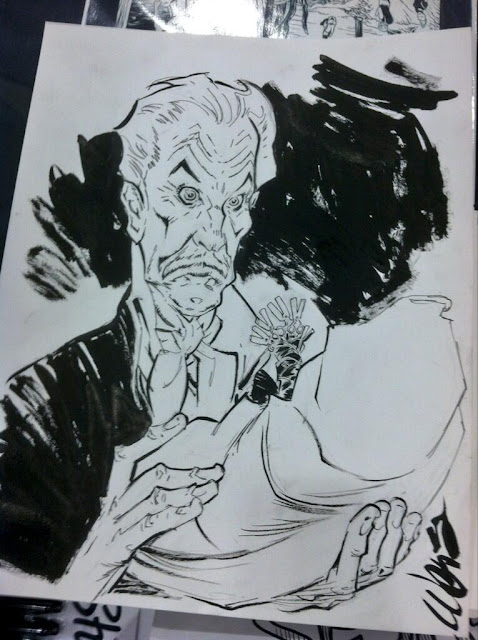 Surprisingly, not the first Vincent Price con sketch I've been asked to draw. 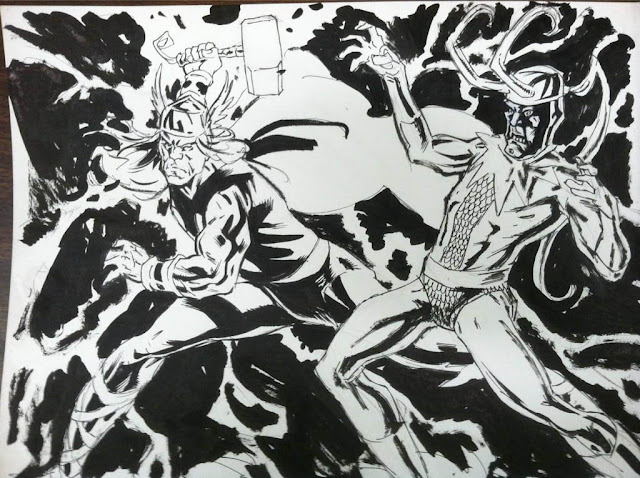 Kinda blew it on Loki's face.  Happy with the Thor pose, though. 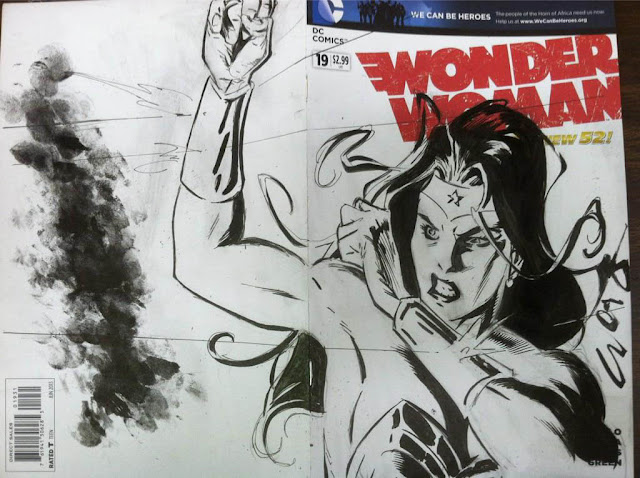 Not the best princess of power I've ever drawn, but not the worst.  I always like drawing her. 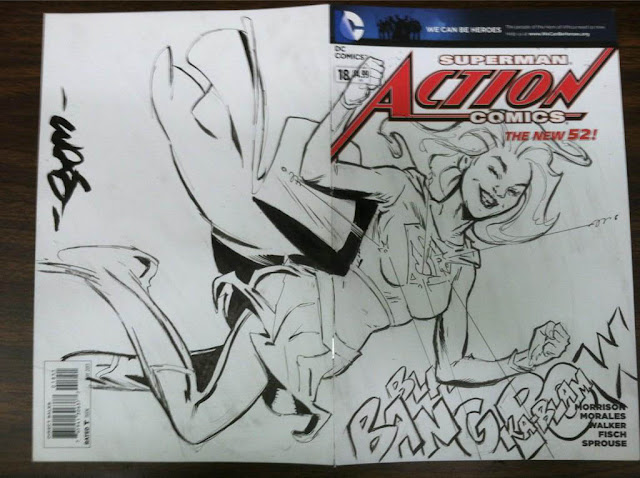 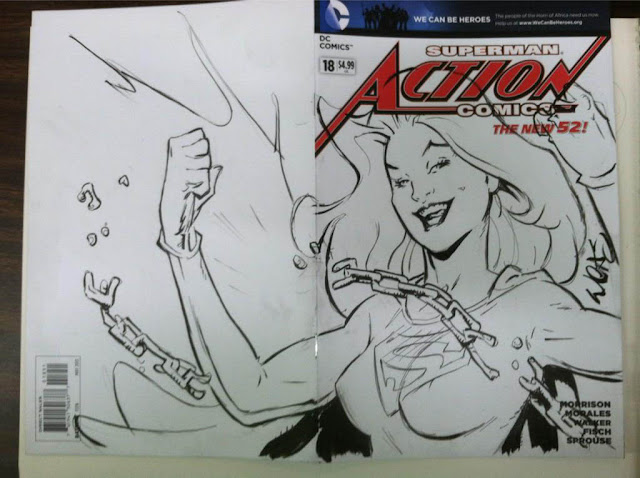 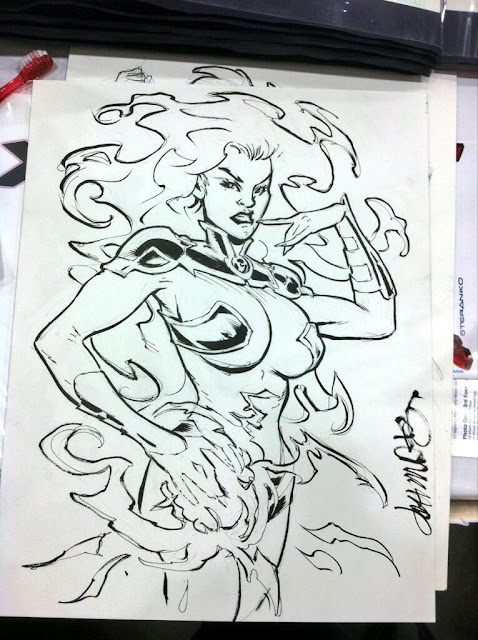 The all new 52 whorish Starfire.  Apparently, she keeps her tits covered with advanced alien technology.  Reach for the stars... 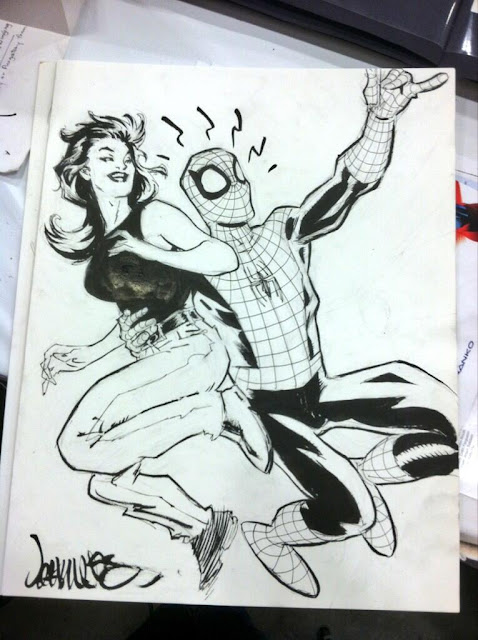 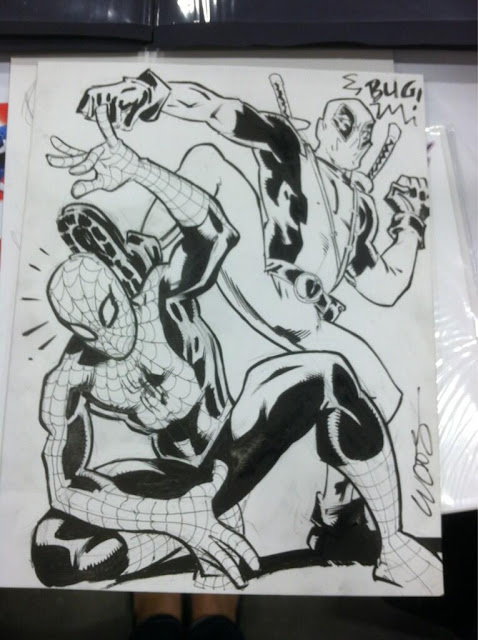 I hate drawing Spiderman.  The bat-shit crazy it would take to design a costume like that, knowing full well you'd have to draw it a hundred times a month, it surpised me not ione bit when I first heard he was a, Ayn Rand wacko.  Still, I was pretty happy with the way these turned out. 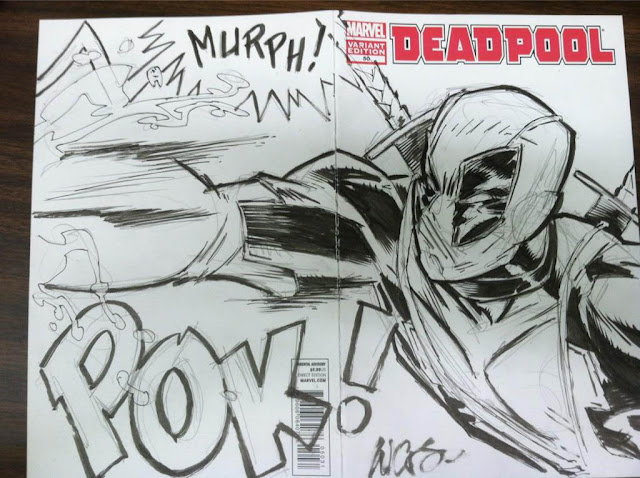 And another Deadpool makes it one and a half.  So, even with the cheat of one guy getting three Wolvies, the Canuck wins by a nose. 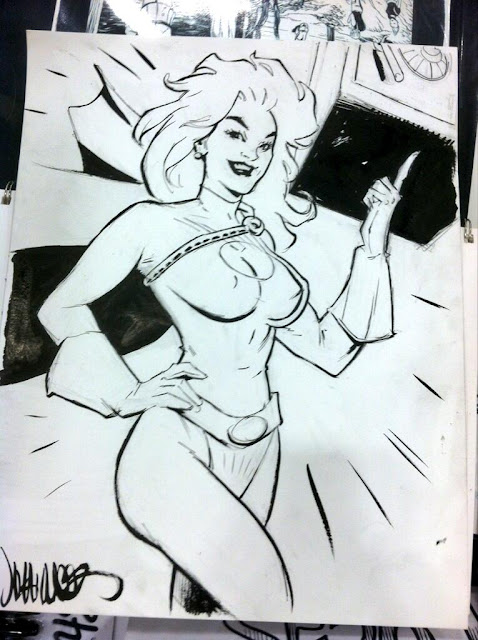 Such a silly costume, but I love Power Girl. 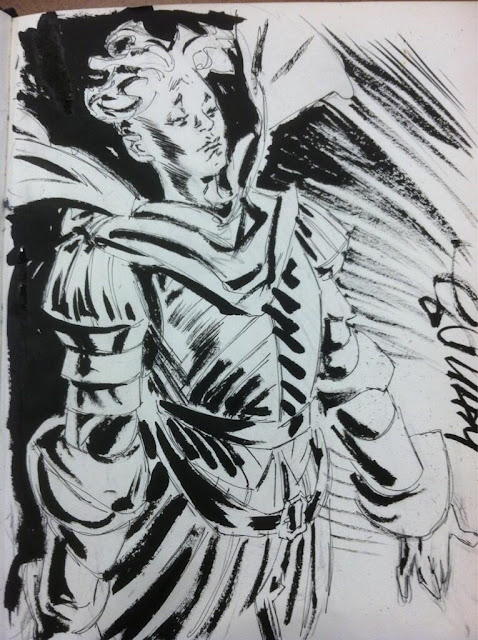 Game of Thrones something-or-other.  I haven't seen it.  Waiting for it to hit Netflix. 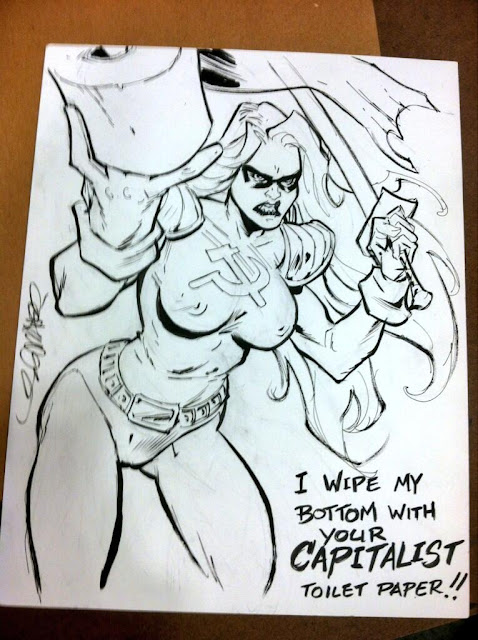 Crimson Sabre, the creation of the guy who got it. 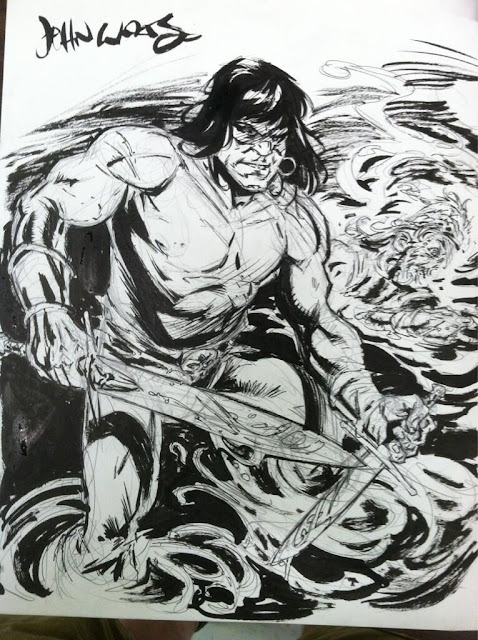 I love Conan, but I think I kinda suck at drawing him.  Bat-shit O'Barr reached over and inked a bit of one arm. 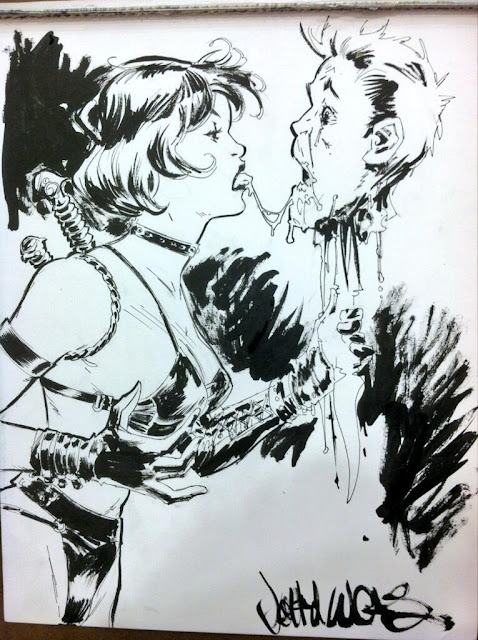 Not too long ago I promised I'd post more often and regularly, and here it is a month since my last post.  I've been busy, but that's no excuse.

What's been keeping me busy is a case of the same old same old.  I'm plugging away on FOUR NORSEMEN OF THE APOCALYPSE, the graphic novel I'm doing with writer Matt Sturges.  Unfortunately, my production on this is like the trains in India- slow and smelly, but chugging along.  Hopefully, it's worth the wait.

Here are a couple of my most recent pages.  Hope you dig em. 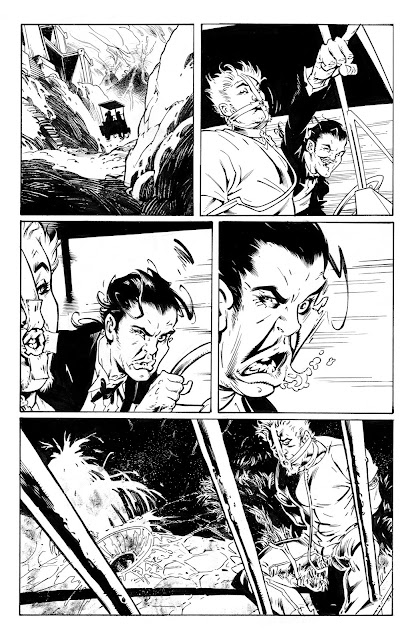 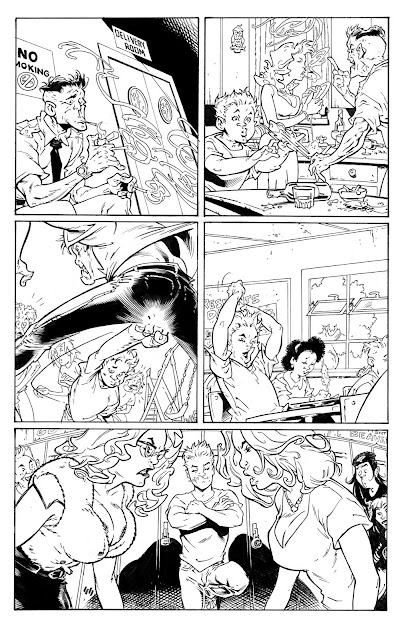 Yes, my friends, this book is bat-shit crazy.